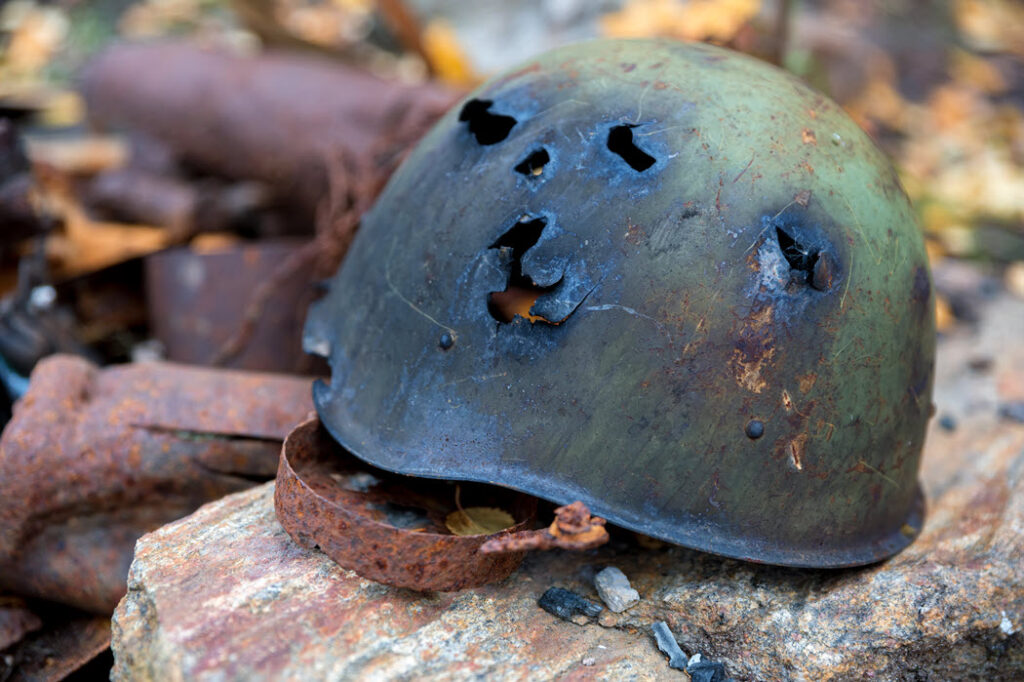 During those querulous, divided years they stood up and took lumps, only to tremble afterward in some fervent rush of unspent adrenaline. Later, they withered and avoided eye contact in order to self-pacify and search the remnants of ego. Still, they cautiously wait in some distracted state of dread, for the next time.

I’m almost fifteen years old and I’m thinking that Dad’s Beer Nights are an unseemly thing to be avoided during those lazy, stripling times of my adolescence. Boozy talk with his old war friends of ancient battlefields they’d seen in what I later understood to be, ‘The Great Freedom From Tyranny’.

I remember suffering sudden attacks of teen petulance at their mention of how Brownie or Charlie or Joe were killed and how ‘they’ were the true and unsung heroes of WWII. Inwardly I trivially complained at how their reveries interrupted my Hendrix albums and my breasty daydreams whenever I was volunteered to run their beers that whole and vast fifteen feet from kitchen fridge to summer-heated back porch.

It was decades before I fully understood.

And it was many more years until I realized what the ‘comfort of the haymow’ my father had sometimes referenced, actually meant.

The promise of the haymow, and its warm comforts, was where his after battle yester-thoughts inevitably drifted to; back a couple of years in time from that time and thousands of miles from this war and overlooking autumn’s naked white birch and Norther Ontario’s summer-spent pines where he, the unlikely 18 year-old Canadian artillery gunner-in-yearning escaped to in his mind when lying hungry and frightened in this or that muddy crater or trench in some foreign country after having witnessed the bloated and rotting effects his artillery shells had made upon that vaguely similar land. Advancing from Juno through those splintered, flattened trees and the deathsmell of festering, ribshown livestock.

The haymow, you see, was his brightsummerlit and deepnight friendly retreat atop the leaning barn of his adoptive home on the farm near Pembroke, Ontario where he grew up. Busily silent under the occasional Borealis and his bed there was quietly warm and cuddlingly made and it was safe above the howl of wolves.

At the hottest of high summer, the haymow was drysun and pinesweet. A place of warm contented mice with the security of sparse but filling evening meals of shot squirrel or trapped rabbit secretly cooked with stray potatoes and wild herbs and savored on a small plank table set with two old Woolworth’s chairs. Just above the stinking stall of Napoleon the stud bull who, in contrast to Dad’s own teenage vigil   favored many cows only to disappear once sated.

It was retreat after, and from, some dreaded but coveted trip to town where stored-up views of similarly chaste girls turned hot, and where imagination eventuated in them removing bonnets and in falling hair and caresses and liquid heat spent. Where in the sweet afterward his heartbeat abated almost enough that a Monarch’s wing-beat might be heard and its southern destiny pondered.

Without the yearning for the mow, or at least a belief in the return to it, only the cold, salty, English Channel lay behind him if the 3rd failed and if things went so bad as to drive them back into its formidable and cool, choppy waters. The busy mind of that yester-him in his yester-place as an adolescent.

A great many of us can’t even envision it.

It had been that big war which almost immediately followed that war to end all wars, and like my Dad, (a ginger freckled giant whose secret knowledge of carpentry employed thick-wristed hands to judge wood surface smooth enough for paint and who warned me against borrowing at interest for silly, flashy cars) many similar poor farm-waifs enlisted for new shoes, warm clothes and ‘three hot’s and a cot’.

It was just before the Korean War, The Vietnam War, the Cold War, the rape of South America, Kuwait, Afghanistan, Iraq, Afghanistan 2, Iraq 2 and need we really go on?

It was that curious war fought against the Global Fascist Threat (now comical as seen from above through the eyes of our own monitored and censored Fascist, Neoliberal, Social Network Society.) And sitting on the burner, ready to serve, simmers Syria, North Korea, Iran, Russia, Africa, Ebola, Monetary collapse.

Little did my own dad or any other dad on the enemy side realize that their own masters, the true enemy of the billions, were those special few whose persuasive dollars fed that living and timeless daemon of conflict. Those few who were chauffeured down-town to glassy high-rise buildings and who helicoptered on week-ends to rural estates where they fed well on the flesh and bones of the unwashed poor and the blood of ignorant innocents.

And now, here we are as Westerners crying 99% (all the while living lives that the Senators of Cicero’s time would have killed for) when in fact we, as part of a global whole, – we, who are sheltered, nourished and have options are the true 1%. We have health and excess of diet and the spare time to express nonsensical Social Justice Outrage.

No bombs reach us.

I don’t suppose Dad or his salad days cronies of the late sixties ever gave a thought to how Walter Cronkite was a dying breed or that the number of new oil fields being discovered was on a serious downslide – even back then. Or that there would soon come a time when borrowing money went from being a pejorative to being accepted – and then to a status. Or how housewives saddled with raising hearty children were coached on how they could somehow gain esteem and status and escape family slavery simply by leaping from being a tax-deductible dependant family member to entering that different bondage of a liberated, income earning taxpayer – all at the push of a magazine or two.

How could they have known?

I was but 14 when I witnessed the tears of warriors.

Mostly they cursed their misunderstood war and paid homage to dead fodder by clinking bottles of Black Label and sharing that common anguish. And sometimes that sour, unspeakable ugliness that had stolen their bravery compared their bravado to what their eyes had witnessed, and it would creep like a spider to unbind their camaraderie for the feast. And they would stare blankly at the wall, the table, their beer bottle – never at each other – through teary eyes seeing nothing at all.

We never did talk much, Dad and me. But come some morning-times in my own advancing years when my thoughts remember him, I note some of his very own expressions in my own reflection as I dress on my way here to visit his silent, waning remains. I’m sixty-five.

His Beer Night thoughts become mine.

I stare at us.

And I tell ‘US’ that my own stripling son – the youngest of four – as was I – seems as lost to me as I must have seemed to my own Dad. I tell us it’s all a lie. I tell us I’m sorry that it was all for nothing and that it’s been going on since before the Khans and that, sadly, he unwittingly wasted his whole lifetime bank of courage on a rich man’s lie, leaving only the refuse of misunderstood bitterness for a family he was afraid to love.

And as a fact, Dad (remember, Dad, I’m better educated than you were) it’s been negative. So, I’m sorry to tell you that it was all for nothing. It’s less than nothing.

Generations, minus the need for courage, leave blameless cowards. Neither Socrates nor Plato coined this term. In modern times they would be sissies and fools. It’s just a personal observation.

So, can you believe, Dad, that those striped, walking skeletons you proudly helped liberate from barbed cages have come to aggressively defend themselves from aggression? Or that whole countries are broke and that no one can buy a union made freezer anywhere? Would you have thought that that big old ‘68 Ford V-8 you bought (and that I wanted so much to drive) was part of the ‘beginning-of-the-end’ and that we collectively squandered the biggest one-time resource in planetary history – the remnants of which the whole desperate world will soon be killing each other over.

Would you, from your honored but low and lonely place in these cemetery grounds, actually believe that the very heroin you warned me away from has become currency for arms? Or that an urgently needed pipeline right-of-way far across the globe has forced some to kill our own in the thousands and to use as a weapon the resulting panic? That our abused and limp flag of patriotism was really designed as a rally marker for war, as has done for millennium? That your own great-grandchildren don’t really care?

Dad? Are you there?

You always said I would be smarter than you, so, in frankness, let me speak to your struggles.

In the minds of some, the profit of rebuilding outweighs the anguish of the hungry survivors – for without the industry of those same survivors, investment wanes.

And tell me, Dad. Is this freedom you fought for really supposed to be this . . . free?

As we fall apart under the distractions of reality media and the corruption of bought political hit men and a mounting debt that can never be repaid, why do we do nothing as we watch our country disappear? Is it those sexy yet violent distractions? Is it our Caesar-era sensual deprivations?  Are we too distracted by imaginary friends? Are the short-term comforts of our generation too comfortable?

Why do we divide ourselves into ever smaller concerns and live so as to avoid the notice of the authorities? Why do we mostly take it?

Are our papers finally in order?

Maybe, in the fullness of time, during some deep self-loathing, some of us will come to feel bolder and we’ll outwardly assert; ‘I wish I’d – ’…

Maybe if we stop withering and avoiding personal contact – stop self-pacifying and searching remnants of ego, someone will truly notice us. Maybe if we counter that ‘next time’ – which is surely upon us, we can admit we have been duped and finally discard notions about the safe spaces of our own haymows. Perhaps announce to sleeping mice how, starting today, We Will . . .

Perhaps we chose to stand up and take our lumps now, later to toast friends under the eyes of our own children, with the earned right to stare vacantly on beer nights.